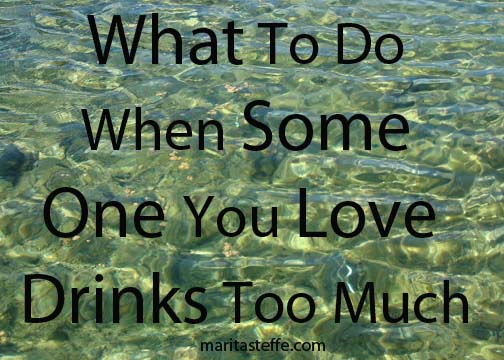 What To Do When Someone You Love Drinks Too Much?

Growing up with alcoholism or living with alcoholic spouses, children or siblings is unpredictable hell. Lots of people in my family of origin drank. They were hardworking, responsible, honest members of society, but too much drinking is not healthy for the one who drinks or the people around them. I grew up in Germany where beer is called liquid bread, but it's still alcohol and it gets you drunk and if you drink it every day you can call yourself an "alcoholic."

In my family the definition of "alcoholic" is someone who is homeless, in the gutter, dressed in rags and drinks cheap liquor. Well this is not true, there are many high functioning alcoholics out there, who are doctors, architects, bankers, politicians, lawyers and so on who do not fit this picture. The clinical defintion of alcoholic is: Someone who cannot control their drinking, drinks on a regular basis in order to cope with life and stress.

My drinking  started  when I was 15. I never knew what was wrong with me until my life was so miserable that I agreed to take some therapy sessions in my late 40s.  My therapist suggested  Alanon and mentioned that I might suffer from codepencency. I was desperate so I went to my first meeting and learned that I started drinking because I felt inadequate and unlovable. Drinking made me feel a lot more comfortable around people and with myself. My perfectionism, my need to control everything and everybody, my anger, my unhappiness and my need to desperately hold onto a very unhealthy marriage, were all signs of what they call "codependency."

Co-dependency is a learned behavior that can be passed down from one generation to another. It is an emotional and behavioral condition that affects an individual’s ability to have a healthy, mutually satisfying relationship. It is also known as “relationship addiction” because people with codependency often form or maintain relationships that are one-sided, emotionally destructive and/or abusive. The disorder was first identified about ten years ago as the result of years of studying interpersonal relationships in families of alcoholics. Co-dependent behavior is learned by watching and imitating other family members who display this type of behavior.

Who Does Co-dependency Affect?

Co-dependency often affects a spouse, a parent, sibling, friend, or co-worker of a person afflicted with alcohol or drug dependence. Originally, co-dependent was a term used to describe partners in chemical dependency, persons living with, or in a relationship with an addicted person. Similar patterns have been seen in people in relationships with chronically or mentally ill individuals. Today, however, the term has broadened to describe any co-dependent person from any dysfunctional family.

If you suffer from other people's drinking or crazymaking behavior, I would suggest Alanon. An organization that helps family members of alcoholics take care of themselves and live happy fulfilled lives. It's a simple program, it's free, or by small donation. I started going to meetings and my life changed. Within 3 months I felt better. I was able to let go of trying to control everything and everybody around me and I could "live and let live." I had more energy and I learned to enjoy my life despite of what was going on around me.

I would stop complaining to my children about my husband's behavior and I could let go of trying to be perfect. I learned that it's important to take care of myself and let others do what they need to do for themselves. Yes it was new behavior and it was uncomfortable, but the more I practiced the better I felt. Now 11 years later I'm still going to meetings, I love the honesty and to be surrounded by people who want to transform their lives and are not afraid to share their feelings. It has helped me empower my life and my children's lives.

If you like to get more information about the program and meetings in your area, check the Alanon website